Should God's Word be locked up by arbitrary copyright laws?

What is the value of a soul??

GodIsGreat hasn't added any friends yet.

I have a fairly good computer but not the greatest display adapter (Windows 7 - 64 bit). I don't think that my display adapter likes e-Sword 11-06, and it has resulted in a number of quirks that I've grown tired of. I've already started using TheWord as my primary Bible Study program, and I'm thinking about going back to e-Sword 10-04. Everything worked perfectly on 10-04. I've been waiting for the time being for more information and/or the possible release of another e-Sword version that works for me. I've been an e-Sword user for a very long time, and I must say that I'm disappointed with the current version. Please consider this as information, not just complaining.


I am on Windows 7 too. Sometimes the text is out of sync or crooked looking. Is that what you are seeing?

You are losing the organizational structure of your module by not using software better made for pdfs.

Press F1 in esword to see the pdf docs. You find table of contents/bookmarks in the left pane. You could have that in your conversion from esword to pdf if you would listen. 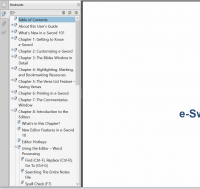 eSword is written in the now abandoned language called Visual basic 6. Microsoft deprecated it in 2008. Many companies still have existing code in vb6 but every year there is less and less and less. Compared to modern languages vb6 is obsolete.

VB6 was never known for speed. It's a slow language designed to help beginners learn to program. That is why Microsoft started VB. The language is like using training wheels. You gain ease of use but lack severely in coding options and optimization. Combine that with poor memory management techniques +  best practices coding violations =  sluggish software.

This is also the reason why eSword has a dated look to its interface. The newer and more stylish controls with larger buttons and easier to read elements exist for modern languages. But new controls  are not being developed for VB6 anymore with a few exceptions. The sequels to VB6 was .Net VB and .Net C#. But C# now dominates. Its widely rumored that Microsoft will drop .Net visual basic all together. Either way, VB6 code is not easily converted to .Net C# or .Net visual basic when dealing with thousands of lines of code.

In a nutshell: eSwords developer can only do so much with a deprecated and abandoned language. Dont expect too much.

I know how to copy files but I get lazy and use the Module installer. It's so fast and easy.

Had an idea: show the tab name of the resource on the install screen. And maybe even the user could change the tab name before installing it? It would at least remind the user what the tab name is to make it easier to find after starting eSword.