e-Sword Edition of The Greek Testament
This commentary has been specifically formatted for e-Sword.e-Sword 10.1 is required for proper display. Earlier versions will show passage comments out of order.

The Greek Testament
This classic, time-tested reference is written in English on the Greek text of the New Testament.

The commentary's scholarship is exemplary, as it emerged in a era when people were more disciplined and educated. It's a work of immense thought and study. When you consider the amount of information Alford had to filter, study, and analyze, all before the age of digital retrieval systems, photo copiers, and electric typewriters, the results are even more impressive.

Even today, Alford remains one of the most influential, authoritative Greek commentaries, often cited in books, dissertations, and blogs.


John Piper says The Greek Testament "comes closer more consistently than any other human commentator to asking my kinds of questions".

John MacArthur's Masters Seminary, who lists this resource with a must-have asterisk in: 850 Books for Biblical Expositors.

Charles Spurgeon says The Greek Testament "is an invaluable aid to the critical study of the text of the New Testament. You will find in it the ripened results of a matured scholarship ... generally highly impartial, always worthy of respect" 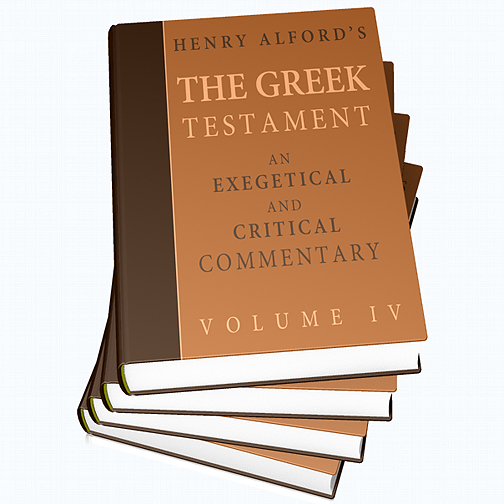 Jul 30 2012 10:58 AM
I agree Josh, this module is amazingly and wonderfully done! It's so easy to read for these old eyes of mine! Thanks Josh, I do appreciate all your hard work for Jesus and the Bride. Blessings to you and your family. lg

Aug 02 2012 08:28 PM
Josh,
Henry Alford was/is one of the most quoted theologians by many other leading theologians. Barnes, Clarke, and others (see e-Sword's official Commentaries) consistently have quoted him. He was, and possibly still is, regarded as a leading authority of Greek New Testament interpretation.

Having this work as part of one's library is a huge bonus for any Seminary student, even still today. And not just the theological Student, but also for any serious Bible student wishing to do exegetical studies.

I don't think works such as Alford and others die away and become less relevant or less authoritative as these people were men of God, and lived their lives to honor Christ in the gifts and talents they were given.

So Josh, this work is most appreciated, and thanks for putting it up. You've done a great job with it.

What is the difference in the zip and the other file for Allford?

the exe installs the cmtx

Thank you for making this classic reference work available!

A Whole Part IS Dedicated to Paul's Hebrews!

How Rich is this Epistle?

The Late Monk/Priest Father Matthew the Poor of St. Macarius the Great, Egypt, wrote "The Richest Epistle on the Person of Christ"as the Book Stutitle.

He also provided a Superb, Perhaps UNPARALLELED, Defense of its Pauline Authorship.

I so want this commentary that I can taste it! And yet, no matter how many times I try, I’m not getting it to load on my iPad Pro—Am I doing something wrong or is it not in a format for me?