Dr. Younce assembles all the pieces of the supernatural puzzle to present the clearest, dispensational view of Eschatology available for e-Sword.

What makes this book rare and exceptional is:Calling this resource a "book" is an understatement—it "feels" and reads like a textbook, not because it's complex but because it's so comprehensive. The book includes nearly 350 pages and dozens of diagrams and images.

If you read older, public domain scholarship on Eschatology, it becomes clear--even comical--that the writers then had no idea what to do with the Old Testament prophecies concerning Israel. They had no idea how to interpret Revelation. And why should they? Israel did not exist then as country. The technology that will enable much of Revelation to literally happen has just arrived in the past few decades and in some cases, the past few years. What seemed like "spiritual symbolism" 100 years ago, or even 50 years ago, could now literally happen.

Dr. Younce ties Old Testament prophecy to Revelation in a powerful, understandable ways. My personal thank you to Dr. Younce who wrote this book, not for personal financial profit, but for the education of Christians. One can strive for an earthly reward or a heavenly reward, and clearly, Dr. Younce has chosen the latter.

From the Back Cover of the book:
SECTION ONE is an overview of the dispensations and shows that, since past prophecies given in Scripture have been fulfilled; we can believe that future prophecy will be fulfilled in the same way. SECTION TWO includes major prophecies fulfilled by Christ when he was here. SECTION THREE of this book explains, in order, fifteen of the major points of Bible Prophecy; from the Rapture of the Church to the New Heavens and the New Earth. They are:

A. THE CHURCH AGE, that period of time in which we now live.

B. THE RAPTURE OF THE CHURCH when the church is “delivered from the wrath to come.” (1 Thessalonians 1:1)

C. THE JUDGMENT SEAT OF CHRIST takes place in Heaven, after the Church is “caught-up” (Gr. harpazo, to snatch).

D. THE RAPTURE is followed immediately by the 7-Year Tribulation Period. Scripture says, “And except those days should be shortened, there should no flesh be saved: but for the elect's (the saved) sake those days shall be shortened.” (Matthew 24:22) The Book of Daniel gives the figures, and they are explained by a Diagram. (Pg.180)

E. THE MARRIAGE SUPPER OF THE LAMB. The Lord Jesus Christ is the Bridegroom; but, who is the Bride? (Pg. 181)

F. THE FIRST BATTLE OF GOG AND MAGOG. Immediately after the Rapture of the Church, Russia and five allies come against the Nation of Israel. For more on this exciting subject, see Page 193.

I. THE SECOND COMING OF JESUS CHRIST. He returns to Earth, not as the meek and mild “Lamb of God”; but, roaring out of Heaven as the “Lion out of the Tribe of Judah.” (Rev. 5:5) to defeat the Anti-Christ and his forces at the Battle of Armageddon (J).

K. THE JUDGMENT OF THE NATIONS is at the end of the Tribulation; where the Lost are cast alive into the Lake of Fire. “Depart from me, ye cursed, into everlasting fire, prepared for the devil and his angels:” (Matthew 25:41)

L. THE KINGDOM REIGN OF CHRIST ON EARTH. God will keep all his promises to Abraham, Isaac, and Jacob. Israel will get her land back. The Kingdom will truly be a time of peace; in contrast to the false peace promised by the Anti-Christ.

M. THE SECOND BATTLE OF GOG AND MAGOG. The Anti-Christ and the False Prophet have been cast into the Lake of Fire (Rev. 19:20); Satan is chained in the Bottomless Pit for the 1,000 Year Kingdom (Rev. 20:1,2); but, is loosed for “a little season.” The Kingdom begins with all saved ; but, some children will reject Christ. With long life being restored , Satan is still able to gather an army as large as “the sand of the sea.” He “bites the dust” again as promised in Genesis 3:14.

N. The Great White Throne Judgment. ALL the lost that have ever lived on Earth are now in “Hades”; or, the Lake of Fire. The Dead, “small and great” will be brought up to stand before God and the “books will be opened.” Their sentence will be, “...I never knew you: depart from me, ye that work iniquity.” (Matthew 7:23)

O. THE NEW HEAVENS AND THE NEW EARTH. God will remodel this Old Earth into a new Earth, to be inhabited only by the saved in their resurrected bodies. There is no sin there, as “wherein dwelleth righteousness.” (2 Peter 3:13)

SECTION FOUR: The City of Babylon and the One-World Religious System.
Remember, Jerusalem and Babylon must be existing at the time of the Rapture. Babylon will be rebuilt into the great city that suffers destruction at the end of the Tribulation Period. (Revelation, Chapters 16, 17,18) Nowhere is the United States mentioned in Bible Prophecy. 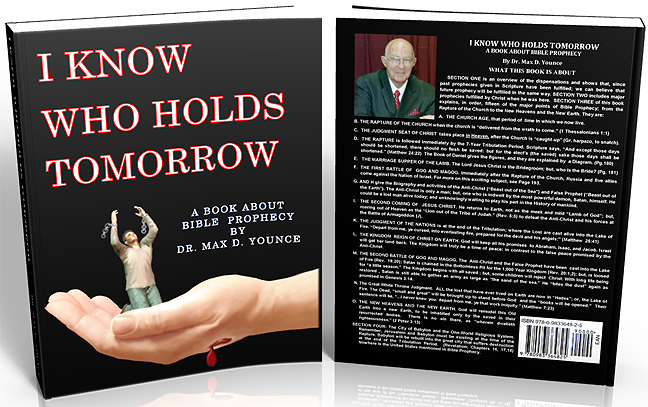 About The Author
Dr. Younce has been in the ministry 40 years, having been ordained in 1970. He is a graduate of Florida Bible College and holds a Doctorate in Theology. He has pastored churches in Ohio, Indiana, Florida, and Minnesota. He is the founding pastor of Heritage Bible Church in Ohio and Heritage Baptist Bible Church in Walnut Grove, Minnesota. He and his wife, Marge, have made Walnut Grove their home since 1991.

Dr. Younce's ministry has always been motivated by a caring evangelistic outreach. Thirty-six years of radio and recently television, bear this out. Teaching is another characteristic of Dr. Younce's ministry. This is evidenced by the many Bible Institute courses he has taught over the years.

Dr. Younce's style of writing is Bible-centered, direct, and inspiring. He "pulls no punches" to tickle the ears. He believes now, more than ever, people need to know what the Bible says…and they need not to be deceived by the "vain traditions of men!"

ALL RIGHTS RESERVED
No portion of this publication may be reproduced, stored in any electronic system, or transmitted in any form or by any means, electronic, mechanical, photocopy, recording, or otherwise, without written permission from the author. Brief quotations may be used in literary reviews.

Unless otherwise indicated, all Scripture quotations are taken from the King James Translation of the Bible.

Or, please visit our web site at www.heritagebbc.com
Online ordering is available for all products.

SECTION FOUR: BABYLON
I. The City of Babylon
-----A. Babylon Is In Existence Now: Babylon Must Be Existing Before the Rapture.
-----B. Where Does the Antichrist Sign the Peace Covenant?
II. The One-World Religious System

Jun 26 2012 03:50 AM
Every Christian needs to download this book and study it. I just spent three hours with it and plan to spend many more. It's well written, heavily documented with God's Word, and easy to understand. On top of everything else, it's illustrated with some very nice charts. Bible Prophecy is a difficult study, but this dear brother explains things in a way that makes things easier to understand. Take a guided tour of Bible Prophecy and enjoy the study instead of dreading it.

It's funny how those who claim man and not God has ultimate free will (they can't both have it!) (which of course is what Luther's great, wonderful, Bondage of the Will was written to refute!) like to claim they know who holds tomorrow, which of course is not possible in that context.  See the "Beyond the Bounds" refutation of that "Open Theology" error at desiringGod.org.

This is not a book refuting Calvinism; rather, it is a book about Eschatology - the study of end times events. The presentation is Dispensational in point of view; and the work is very well done.

Those familiar with J. Dwight Pentecost's epochal work "Things to Come" will find this work similar. It is, in my opinion, the finest single work on Eschatology currently available for eSword (and theWord).

How should I proceed to download the pdf file?

This file is not in PDF format. The file must be downloaded to the PC, moved to the ...\e-Sword folder in refx. format, and is to be viewed from inside e-Sword, from the Reference Library window option. Select the Download option. You will be presented with terms of license which you are to read carefully, then click the box to indicate that you "agree to the terms in the license agreement" ; then click on the [Agree & download] option. You will find two options, one has the filename-type ending in "exe" and the second has the filename-type ending in "refx". You can select either of these; this will download to your PC. Find the downloaded file and allow the PC to open and "Run" the file. The exe option will give you the option to change where to save the file; the default folder is [C:\\Program Files (x86)\e-Sword ] and you can browse to the different drive and path to the ...\e-Sword folder where you store your e-Sword files. The file will be saved there with the filename: Younce, Max - I Know Who Holds Tomorrow.refx
If you select the "refx" option, that will download to the PC, then needs to be copied to the folder where you have the ...\e-Sword files. You can quickly copy a filename.refx file to the relevant folder if you use the Install Module from http://www.biblesupp...dule-installer/