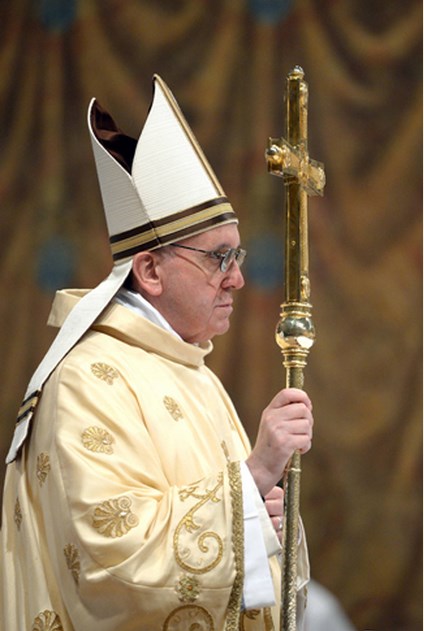 The 60-Minutes Massacre of a Third of Humanity...

Let’s go over Trumpet 5 before delving into Trumpet 6:

In Trumpet 5 (the first woe), the world is attacked for 5 months by demons invading in the form of aliens. Towards the close of the 5 months, the world will have been conditioned to believe that ending this dreadful alien invasion is only possible by the direct intervention of the 8th "king," pope Francis I. Francis will “negotiate” with the aliens in an effort to “end” their invasion. They will “agree” to leave on a given day (exactly 5 months after their invasion, just as the Bible foretold in Revelation 9:5). After the aliens end their invasion, all world leaders will hail pope Francis as saviour of the world and will gladly “give their power and authority to the beast.” (Revelation 17:13)

The 8th king, Pope Francis, will immediately and without any resistance set up the “abomination of desolation” (Daniel 12:11), which is a law-enforced global exaltation of Sunday, thus starting the 3 1/2 year-period foretold in Revelation 11:3.

“And I will give power unto my two witnesses, and they shall prophesy a thousand two hundred and threescore days [3 1/2 years], clothed in sackcloth.” (Revelation 11:3)

The 3 ½ years will start when Sunday is exalted by law soon after Trumpet 5, and it will end with the close of human probation shortly after the sounding of Trumpet 6. This will be a period of extreme hardship for both Yahuwah's people and the world.


“And there shall be a time of trouble, such as never was since there was a nation.” (Daniel 12:1)

Yahuwah's faithful, at this time, will “prophesy” (warn of the Trumpets and plagues to come and appeal for repentance) in “sackcloth.” (Sackcloth represents the extremely difficult conditions and persecution Yahuwah's faithful will face during that time.) Since they foretold the Trumpets, they will also be blamed for the misery resulting from the Trumpets.

The penalty for not abiding by the Sunday law will steadily escalate, making it difficult for Yahuwah's followers to keep the true seventh-day Sabbath of His luni-solar calendar. Consequently, many will be martyred in defense of Yahuwah's true Sabbath. There will be a lapse of several years between the end of Trumpet 5 and the beginning of Trumpet 6 for the following reasons: The 3 1/2-year period will begin after Trumpet 5 when the 8th king, Pope Francis, succeeds in enforcing universal Sunday exaltation, and it will end with close of probation just before Trumpet 7.

Trumpet 6 will happen in one hour; Trumpet 7 will “come quickly” afterwards (Revelation 11:14). That means that there will be a lapse of about 3 ½ years between the end of Trumpet 5 and the beginning of Trumpet 6. When trumpet 6 hits our planet, Francis I will declare that the global Sunday Law enforcement is still not gaining heaven's approval due to the lunatic fringe who are upholding the Lunar Sabbath, and denouncing the Gregorian Sunday.


“Then the sixth angel sounded: and I heard a voice from the four horns of the golden altar which is before Yahuwah, saying to the sixth angel who had the trumpet, 'Release the four angels who are bound at the great river Euphrates.'” (Revelation 9:13-14)

Who are these angels bound at the great river Euphrates? They are not heaven’s angels because the angels of heaven are never “bound.” We know from the study of His Word that many of the fallen angels are bound in the invisible "bottomless pit." So we conclude from the Bible that the great river Euphrates is the prison house where commanding fallen angels are bound within the bottomless pit.


“So the four angels, who had been prepared for the hour and day and month and year, were released to kill a third of mankind. Now the number of the army of the horsemen was two hundred million; I heard the number of them.” (Revelation 9:15-16)

The prophesied time of Trumpet 6 is very specific: In a certain hour, on a specific day, of a month in a year, one-third of the world's population will be massacred by the two-hundred million demons led by four commanding angels. The devil will use this great army of two hundred million demons to create a universal blood bath in the space of only one hour.

In one hour the death toll will be over two billion humans. Since the end of the 3 ½ years signals the end of probation, it is natural to conclude that Yahuwah will not allow the massacre of a third of all living souls except near the very close of probation. This is why we believe that the timing of the global massacre will occur near the end of 3 ½ -year period.


“And thus I saw the horses in the vision: those who sat on them had breastplates of fiery red, hyacinth blue, and sulfur yellow; and the heads of the horses were like the heads of lions; and out of their mouths came fire, smoke, and brimstone. By these three plagues a third of mankind was killed—by the fire and the smoke and the brimstone which came out of their mouths. For their power is in their mouth and in their tails; for their tails are like serpents, having heads; and with them they do harm.” (Revelation 9:17-19)

The bodily form that the demonic army will have will be different than that of Trumpet 5. These demons will appear as horsemen, they will have heads like lions, tails like serpents, and fire, smoke, and brimstone will come out of their mouth. It is this fire, smoke and brimstone that will wipe out a third of humanity.


“But the rest of mankind, who were not killed by these plagues, did not repent of the works of their hands, that they should not worship demons, and idols of gold, silver, brass, stone, and wood, which can neither see nor hear nor walk. And they did not repent of their murders or their sorceries or their sexual immorality or their thefts.” (Revelation 9:20-21)

Sadly, the remaining two-thirds of humanity will continue to rebel against Yahuwah, despising His last call of mercy. After enduring the six Trumpets, what stronger wake-up call can our merciful loving Father give us before probation closes? By our reckless rebellion we will be sealing our destiny and will be doomed to be hit by Trumpet 7 (the 3rd Woe), which will be inflicted without mercy.

To those who are faithful during this time, the promises of Psalm 46 will be fulfilled in their lives:

Thank you very much, the post is just perfect, it was very interesting to read your article! Come to my site parking fury

Thanks for sharing this post,its really interesting.hire react developer

You are sharing interesting articles. It will be of great help to me, my friends and relatives. Thanks for sharing it. Gartic Phone