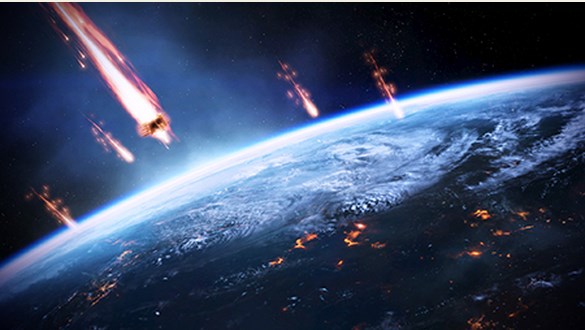 When Trumpet 3 sounds, there will be another giant meteor dropping from the sky like a blazing torch. It will fall on 1/3 of the rivers and on the springs of waters, causing 1/3 of the freshwater on earth to become bitter. Many people will die from drinking this extremely bitter and poisonous water.

This “great star”, or blazing meteor, is dubbed “Wormwood.” This name represents a poisonous woody plant, with a strong aromatic odor and an extremely bitter taste. In the Bible, this plant symbolizes great calamity and sorrow.

The plague of Trumpet 3 has been foretold by Jeremiah in the following solemn warning:


“And Yahuwah saith, Because they have forsaken my law which I set before them, and have not obeyed my voice, neither walked therein; But have walked after the imagination of their own heart, and after Baalim, which their fathers taught them: Therefore thus saith Yahuwah of hosts, the Elohim of Israel; Behold, I will feed them, [even] this people, with wormwood, and give them water of gall to drink.” (Jeremiah 9:13-15)

Thus, we see that during Trumpets 2 & 3, both fresh and salt waters are greatly contaminated. Through these two plagues, 1/3 of all of the world's water becomes unusable, as seawater turns to blood in Trumpet 2 and freshwater is made bitter in Trumpet 3. Furthermore, these two Trumpets will likely produce significant atmospheric pollution. We know that meteors are highly toxic. There have been reports of poisonous gases and radiation emitted from relatively small meteors that have hit the earth in the past.

On September 18, 2007, Living in Peru published an article with the following headline: “Police Officers Hospitalized After Collecting Meteorite Samples in Peru.” According to Peru's Government News Agency, at least seven police officers were affected after they collected samples from the landing site of what is thought to be meteorite. (http://archive.perut...te-samples-peru)

There is no question that the falling of the great meteor of Trumpet 3 will lead to the destruction of freshwater sources: rivers, streams, and lakes. Today, even before the catastrophic effects of Trumpet 3, there is already a worldwide freshwater crisis. Here are some facts:Rivers and lakes all over the world now contain contamination from:When Trumpet 3 hits Earth successively after the Trumpets 1 & 2, the current global freshwater crisis will be greatly worsened and the Bible confirms that many will die as a result of this plague.

Yahuwah's Word never fails; Benedict XVI only reigned for about 8 years. We are now living under the reign of the 8th "king" (Francis I), the last pope according to Revelation 17.

Yahuwah's Word never fails; Benedict XVI only reigned for about 8 years. We are now living under the reign of the 8th "king" (Francis I), the last pope according to Revelation 17. According to Revelation 17:8, the 8th king would arise from the "bottomless pit." This means that Satan will control Francis I to a level not seen in the previous 7 kings; for he is to be the last pope.

In the Bible, a trumpet blast represents a warning. In the Book of Revelation, the Trumpets represent a dire warning from Yahuwah, namely that probation for all humans is about to close. It is through the Trumpets that Yahuwah will attempt to capture the attention of humanity and turn our thoughts to the nearness of the end and the importance of accepting His final call of mercy.

Today... will you accept His loving call of mercy? All you have to do is acknowledge your present sinful condition, and realize your great need for Yahushua. Accept Him as the Master of your life and Saviour of the world! The choice is yours. Yahuwah is still extending His offer of love and mercy to you right now!


“Declare in Judah and proclaim in Jerusalem, and say: Blow the trumpet in the land; Cry, ‘Gather together,’ and say, ‘Assemble yourselves, and let us go into the fortified cities.’ Set up the standard toward Zion. Take refuge! Do not delay! For I will bring disaster from the north, and great destruction.” (Jeremiah 4:5-6)

“He heard the sound of the trumpet, but did not take warning; his blood shall be upon himself. But he who takes warning will save his life.” (Ezekiel 33:5)

Your article is really good and I was intrigued by it. It gives me a lot of useful knowledge and i thank you very much for that.

Amazing post! Thanks for interesting and informative post. It is really what I expected to see trust in future you.